Candy corn is a type of candy which is often associated with Halloween. It is often given to children when they go trick-or-treating.

The most common form of candy corn is tricolor and roughly triangular with one tip white, a middle wide stripe of orange and a base of yellow, mimicking a kernel of corn. Alternately another variant is Indian candy corn, based on maize: This has a brown stripe on the bottom and cocoa rather than the yellow and is often sold through Thanksgiving whereas regular candy corn is more commonly taken off shelves at the beginning of November. Some candy corn has candy pumpkins in a mix. Certain brands will also stock regular candy corn year round, while others rotate various holiday-themed corn.

The idea for candy corn originated with confectioner George Renninger who at the time worked for the Wunderle Candy Company in Philadelphia, Pennsylvania in 1880. By the turn of the century the Goelitz Confectionery Company (now the Jelly Belly Candy Company) began production of the candy yet calling it "Chicken Feed"—this name did not stick, however.

Initially it was produced by hand using carnauba wax, corn syrup, sugar, and water. Later fondant was also added for texturing while marshmallow was added for a softer bite. The pouring process takes 3 passes, one for each color. These days the recipe remains the same, but formerly hand production are now done by machine, which is necessary given that 20 million pounds (just over 9072 metric tons) is now sold annually. 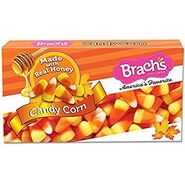 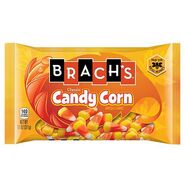 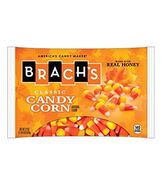 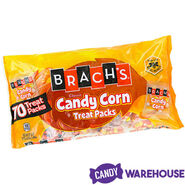 Retrieved from "https://halloween.fandom.com/wiki/Candy_corn?oldid=38019"
Community content is available under CC-BY-SA unless otherwise noted.