Cats, especially black ones, are strongly associated with Halloween. In the United States and some other countries, black cats are said to bring bad luck. Cats are also often depicted as witches' familiars. Therefore, it is not surprising that the cat costume has become a very popular Halloween costume.

The costume is most often worn by women and young children, although it may be worn by men as well. The costume can take many forms. At its simplest level, it might consist of a cat mask or a headband with two fake cat ears on it and a fake tail attached to the wearer's usual clothes. Face painting could also help to greatly enhance the look of a simple cat costume.

A party-goer or trick-or-treater wearing a cat costume might be accompanying a partner, friend or family member wearing a witch costume. 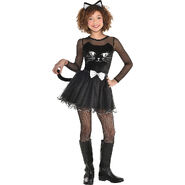 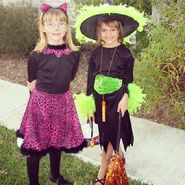