A Hocus (from Hocus Pocus and hat) is a creature that only consists of a witches hat and legs. It seems to be a kind of witch. Its counterpart is the Pocus, a cauldron with legs.

The Hocus doesn't have any mythological roots, but since the 2010s, it's a popular kind of motive for Halloween-decorations. The name was coined by Jonathan Wojcik, who was also the first person to describe them as a species of monster.

There are many variations of hocuses that look slightly different, but they all are witches hats with a pair of legs. Some also have a face, but these are rare.

Since the hocus doesn't has its own folklore yet and only exists as decorational item, nothing is known about the origins, abilities and behaviour of this creature. Wojcik himself made several theories.

According to him, the hocus might be a witch whose body was changed by powerful magic. Maybe her magic is strong enough that she doesn't need a body anymore, or the hat, which might be the source of her power, became so powerful that it consumed the witch.

The hocus might also be a familiar or magical construct that serves the witch, or a weaker kind of witch. Maybe the body of the witch collapsed under her magic and the hocus is all that remains.

Because of its prominent legs, Wojcik suggested that the hocus likes to dance. It's possible that they are easily distracted by music, flocking to it and grooving so uncontrollably that the right song playing on a loop could effectively bind them to one area. But maybe they also use their dance to hypnotize humans who will dance along unable to stop until they die of exhaustion.

Some hocuses also look like they are attracted to shiny things and use them to decorate themselves. Therefore, it might be possible to protect oneself by providing them something worthless but pretty.

a hocus decorated with gems 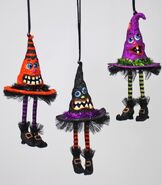 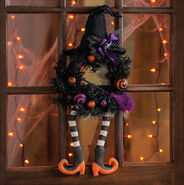 a hocus with a wreathe-like body. Maybe it's a missing link between a witch and a hocus

A Hocus from the 2017 Halloween season at Michael's

In 2017 was the first time that umbrealla-hocuses were spottet, probably related to the Japanese Kasa-Obake.
Add a photo to this gallery

Retrieved from "https://halloween.fandom.com/wiki/Hocus?oldid=27905"
Community content is available under CC-BY-SA unless otherwise noted.