The Beldam (also known as the Other Mother) is the main antagonist of the stop-motion animated movie Coraline.

In the novel and the film

In the novel, the Beldam was implied to be a former human, who somehow transitioned into a spider/arachnid creature, presumably after death. She hints this to Coraline when she recounts how she buried her own mother alive in a grave as a child. Additionally, in her true form, she has human skin although her blood is likened to black tar. Meanwhile, the Other World, in its true form, is a blank void resembling the sketchings of a child instead of a gigantic spider web. Her methods of luring in her victim, unlike in the film, are much more straightforward, where she simply needs her rats to lure her victims. She also never directly kills her creations, regardless of their disobedience, but instead brainwashes them via torture to do things against their will, for example to harm Coraline. Despite her evil, she holds no personal grudge against the victim's close ones in the real world, only harming them if they obstruct her plan. She even recognizes that her "love" towards her victims is purely selfish (of course, she does not seem to mind0. After her defeat by Coraline, her severed hand stalks her in the real world for days. Coraline nevertheless is able to overpower the hand easily without much effort or thought. 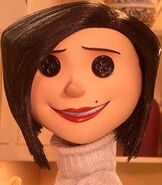 The Other Mother as she first appears in the film.
Add a photo to this gallery
Retrieved from "https://halloween.fandom.com/wiki/Other_Mother?oldid=30591"
Community content is available under CC-BY-SA unless otherwise noted.