A Pocus (from Hocus Pocus and pot) is a creature that only consists of a witches cauldron and legs. It seems to be a kind of witch. Its counterpart is the Hocus, a hat with legs.

The Pocus doesn't have any mythological roots, but is a popular kind of motive for Halloween-decorations. The name was coined by Jonathan Wojcik, who was also the first person to describe them as a species of monster.

There are many variations of hocuses that look slightly different, but they all are cauldrons with a pair of legs. Some also have a face, but these are rare.

Wojcik theorized, that a pocus is created from a witches cauldron when over years of making magical potions some magic leaks into the cauldron itself and gives it some kind of consciousness. Maybe the cauldron even swallows the witch and merges with her, explaing the witch-like legs of most pocuses.

After it swallowed its first witch, a pocus most likely craves for more humans. Another witch would be desired, but humans in general seem to fall prey to them.

To lure its victims, a pocus appears to be filled with gold, candy or whatever the victim desires. If somebody comes to close to the pocus, it just swallows them whole.

Like an octopus, a pocus is able to change its colour to blend into ordinary cookware or lure victims with flashy colours. Maybe they even communicate by letting letters or symbols appear on their surface.

Sometimes, a witch may keep the cauldron after its transformation into a pocus. This is a considerable risk, because the pocus might try to eat the witch, but for powerful witches it's worth the risk because in a pocus they can brew even more powerful potions, even if it also makes the pocus more powerful and intelligent.

While hocuses are mostly crazy and very active, pocuses are a lot calmer and slower than their cousins. 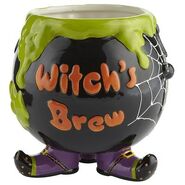 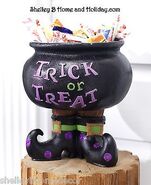 Pocuses use candy to lure their victims 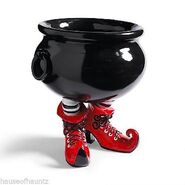 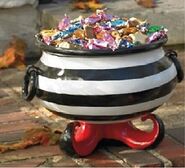 Retrieved from "https://halloween.fandom.com/wiki/Pocus?oldid=29950"
Community content is available under CC-BY-SA unless otherwise noted.