Start a Wiki
Slender Man is a fictional paranormal creature who usually lurks in the woods and leaves out pages for his victims to find to lead them to him. He wears a black suit with a tie. He is said to stalk people and kill them at some point. It is unknown what happens to the vicitim afterwards.

He usually wears a suit and tie, which is unknown why. He has no face and his skin is white and he is very tall and consists very long arms that hang down to his knees. Sometimes four tentacles will pop out of his back, mainly to scare you and perhaps revealing a demonic or elder god origin.

He has appeared in many of his own games. The two most popular games out there right now are Slender: The Eight Pages and Slender: The Arrival. There are also a lot of apps at the app store that involve Slender Man.

Slender Man has made several cameos in games. He has also inspired the similar Enderman enemies from Minecraft.

Slender Man is said to stalk, abduct, or kill people. While he is chasing you, you usually have to collect eight pages in a forest or abandoned houses and survive as long as you can while running from him. He also has a power to mess up electronic devices which makes the screen all fuzzy so it is hard to catch him on camera.

People claim to have sighted Slender Man throughout the years, but they most likely saw something like a bear or they were just seeing things.

The first image of Slender Man. 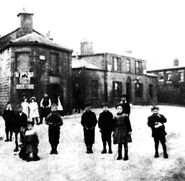 Retrieved from "https://halloween.fandom.com/wiki/Slender_Man?oldid=39414"
Community content is available under CC-BY-SA unless otherwise noted.