Spider-Man has been one of the most popular superheroes for nearly fifty years now. A series of recent movies have helped to increase his popularity around the world. Although Spider-Man is definitely a good guy, many people associate spiders with evil and fear. Spider-Man's popularity and his connection to a scary creature mean that a Spider-Man costume is a popular costume choice for both adults and children at Halloween.

A Spider-Man costume consists of a mask and a body-suit in Spider-Man's colors of blue and red, bearing a spider web design and spider motif. The mask may cover the entire head or just the face. Unlike the original comic book character's mask, the masks on children's Spider-Man costumes often have holes around the nose and mouth areas for safety reasons. Having your face painted to look like Spider-Man's mask is an alternative to wearing a mask yourself. The costume may also include red gloves and boots. A Spider-Man costume is likely to be store-bought, as producing an attractive homemade one would be difficult for most people.

A common alternate version of this costume, especially amongst teenagers and adults is the Black Suit Spider-Man, which signaled the coming of Venom in the comic book series and is one of the fan-favorite versions of the character's outfit. It differs from the regular "Spectacular" suit by being entirely black except for the typical white eye covers and a redesigned white spider emblem, which would later be seen in the Venom character. 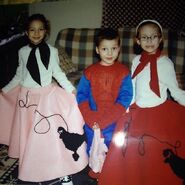 See the article on Spider-Man on Fandom's Marvel wiki.
Retrieved from "https://halloween.fandom.com/wiki/Spider-Man_costume?oldid=34512"
Community content is available under CC-BY-SA unless otherwise noted.