The "Walking Dead Teddy Bear Girl" is a lifesize scary prop decoration for Halloween. It depicts a girl wearing bunny slippers and very bloody clothing. It is based on a character formerly only named "Little Girl Walker" until The Walking Dead social game, which revealed her name to be Summer. She played a bit but very important role in the television show's pilot episode. 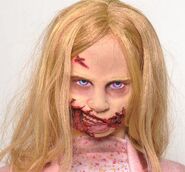 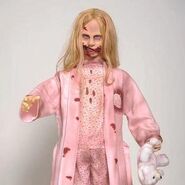 Retrieved from "https://halloween.fandom.com/wiki/Walking_Dead_Teddy_Bear_Girl_Animated_Prop?oldid=22598"
Community content is available under CC-BY-SA unless otherwise noted.