According to legend, werewolves are born human, but become werewolves after being bitten by one or infected by one’s blood. A werewolf appears human most of the time, but turns into a wolf-like creature typically at the full moon -- usually described as the three nights around the apex of the full moon. A werewolf has no sanity whence transformed, and will not stop at prey. Werewolves will harm anyone they see, except other werewolves, of course. The werewolf is said to look like a normal man or woman when there isn't a full moon but they can transform into their werewolf form at the full moon.

A werewolf from Paranormal Witness. 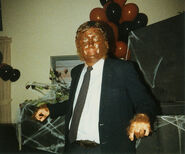 Werewolf in a suit?
Add a photo to this gallery